Vietnam International Bank (VIB) has announced pre-tax profits of nearly VNĐ2.3 trillion in the first quarter of this year (Q1), up 26 per cent year-on-year. 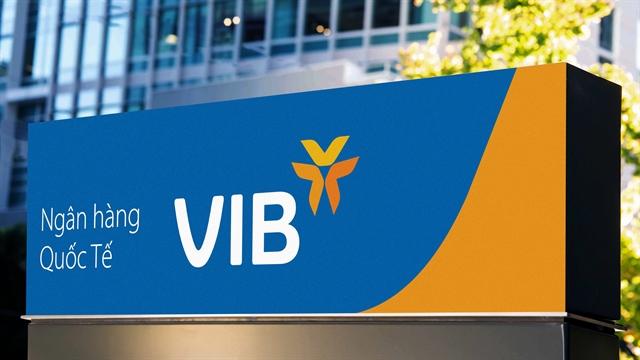 VIB is striving to reach 10 million customers by 2026, focusing on developing a customer ecosystem on a variety of smart financial platforms.— Photo courtesy of VIB

The bank’s return on equity ratio (ROE) was 30 per cent, among the highest in the banking industry.

The bank’s outstanding loans topped nearly VNĐ217 trillion, and its capital mobilisation experienced positive growth of 7.7 per cent to reach VNĐ302 trillion. Meanwhile, the bank also posted credit growth of 6.1 per cent in the three months.

Net profit margin (NIM) experienced an increase of 4.5 per cent in the period, thanks to a year-on-year decline of 40 basis points in funding costs.

NIM expansion mainly came from current and saving account (CASA) growth of more than 40 per cent and loans from foreign financial institutions, which increased by nearly 80 per cent over the same period last year.

These sources of capital helped VIB keep its mobilising costs at a low level despite the slight increase in interest rates in the market.

Meanwhile, the bank's cost-income ratio (CIR) fell to its most efficient level ever at 35 per cent, proving its outstanding performance in cost management and increasing profitability. In addition, credit costs were managed at a low-level thanks to effective risk management and control.

VIB is striving to reach 10 million customers by 2026, focusing on developing a customer ecosystem on a variety of smart financial platforms.

In the first quarter, VIB announced the expansion of the card opening ecosystem in the Bizverse World virtual environment, bringing a new experience of opening virtual credit cards to Vietnamese users.

With this move, VIB became one of the first banks in the country to offer customers a variety of card opening channels from those in real space and the virtual world, at branches and in leading e-commerce platforms in the country and region.

With the strategy of developing an unlimited card opening ecosystem, VIB is expected to provide the market with 2.5 million credit cards in the next five years, thus contributing to stronger cashless payment activities. — VNS

Author: admin1
The total score of the article is: 0 in 0 Evaluation
Click to rate the article
Bài viết liên quan
Friday, 29/04/2022

Central bank sells US dollar forward for first time since 2018

The State Bank of Vietnam (SBV) has recently sold US dollar forward for the first time since 2018 to support the liquidity of the foreign exchange market.
Friday, 15/04/2022

Despite multiple warnings about the dangers of getting dermal fillers at unauthorised facilities, Việt Đức Hospital is still seeing numerous cases.
Friday, 15/04/2022

Japan’s Order of the Rising Sun conferred on Vietnamese scientist

The Vietnam General Confederation of Labour has proposed a 7 per cent increase in minimum wages from July 1, but many insiders gave a thumbs down to the proposal.
Saturday, 09/04/2022

VPS Securities remained the top brokerage in the first quarter with a 17.9 per cent market share, according to data released by the HCM Stock Exchange.
Thurday, 07/04/2022

What I learned… helping to launch a charity in a week, with Caroline Ayling of JAA

Our CVs showcase our careers, but often miss out the most important factors in shaping them. Caroline Ayling is marketing director at John Ayling & Associates (JAA) – but just as significant as her career is her role in the creation of charity Duchenne UK, which she helped her cousin to launch off ...
Saturday, 02/04/2022

What the workplaces of the future can learn from brand destinations

What I learned… at the BBC, with Amplify’s Adam Heyhurst

Adam Heyhurst is head of broadcast at culture and experience agency Amplify. He started his career at the BBC, going from Strictly Come Dancing to producing wildly popular video content for Radio 1’s Live Lounge. What did Auntie Beeb teach him for his onward trajectory into agencyland?
Thurday, 31/03/2022

Diversity of representation in media products has rightly been a priority in recent years. But the data shows that diversity among the people making those products – along lines of gender, sexuality, ethnicity and other axes – lags behind. Sophie Brooks, managing director at Tug Toronto, argues ...
Wednesday, 24/11/2021

In 2018, 80% of Gousto’s sign-ups came through performance marketing. Now, following three years of rapid growth, the business is seeing greater results from its investment into brand.
News

Fair on trade and industry underway in Nam Dinh